Industry 4.0 in BRICS: What is the Fourth Industrial Revolution? | CGOCMALL

Home > Industry information > Industry 4.0 In Brics: What Is The Fourth Industrial Revolution?

Industry 4.0 In Brics: What Is The Fourth Industrial Revolution?

During April 2013's Hannover Fair, the idea of "Industry 4.0" was officially presented by Germany and soon became a tag that every industrialized society wants to attach itself to. People in private sectors welcome it as a revolution in manufacturing, and governments see it as a stimulant to the sluggish economy.

This year's BRICS Summit, which is going to be held in South Africa's Johannesburg from July 25 to 27, also includes that as a new area of cooperation. So, what's the magic of it and how this developed country's notion should relate to developing countries?

The differences in Industry 4.0

Unlike the first three Industrial Revolutions which were driven by one specific discovery or breakthrough, the fourth one is based on "combinations of technologies," as Klaus Schwab, the founder of the World Economic Forum, once pointed out.

Observing the development timeline, we can find that Industrial Revolution started with the advent of machines and climbed up one stage after another when human beings tried to harness them to achieve larger and more complex output with less input. The final result, as far as we can see, for now, is "smart factory."

A factory is where mass production happens and being smart can be regarded as an advanced state of automation, meaning that we can teach machines to "think," which is enabling it to perform self-diagnosis, self-configuration and self-optimization, a lot more than doing repetitive work. As a result, the amount of time, energy and labor saved during that process can be put elsewhere to bring more productivity and generate far higher value.

For developing countries – for example, the BRICS countries – Industry 4.0 poses challenges but also provides opportunities. The challenging part can be mainly categorized into three aspects: labor force not so highly-skilled, infrastructure yet to be improved, and world factory ceased-to-be.

The first two are easy to understand. Industry 4.0 represents an intelligence-intensive instead of labor-intensive production mode. That is clearly in favor of highly-skilled workers, especially those who have received higher education in relevant domains. However, a large proportion of developing countries’ workforce does not belong to that group.

Additionally, determined by its nature, Industry 4.0 can only be built on a solid base of physical and cyber infrastructure. For developing countries who may still stay in the second or early third phase of the industrial revolution, laying the foundation is necessary, either by their own efforts or through cooperation. 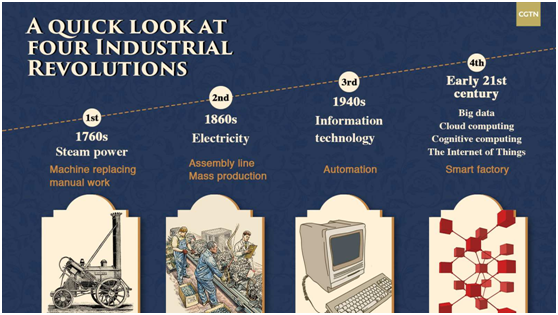 Last comes factory relocations. One characteristic of smart production is customization, which is very likely to reverse the once-popular strategy of setting factories on the other side of the globe. A closer-to-consumer manufacturer can respond to home markets quicker and better, not to mention the job opportunities some developed countries want back so desperately.

As for what Industry 4.0 can offer, developing countries' collective wisdom and efforts to address those challenges will bridge development gaps, advance existing cooperation and introduce great changes to their technology, industry and society.

The vision of BRICS countries has already been shown by adding that trendy topic on the agenda. To know more about their science and technology development in the current stage and cooperation ongoing, please follow CGTN's "Industry 4.0 in BRICS" series in coming day.