Large-scale integrated circuits have laid the foundation for the development of computers and networks. According to Moore's Law, the integration of integrated circuits has been doubling every 18 months. Recently, its linearity has reached tens of nanometers (mm, micrometer, nanometer), and each chip contains tens of billions of components.

Computer science has developed to a very high level. Whether the computer hardware or software is very mature, computers with a speed of teraflops per second or higher (Tianhe: 2000 trillion times, the world's second) have been published. A variety of high-speed computing, massive information processing and conversion provides a powerful tool.

Since the birth of the computer in 1943, due to the invention of integrated circuits, computers have been rapidly developing in the direction of high computing speed and volume miniaturization. At present, the world's major developed countries and China have large computers with more than tens of billions of floating-point operations. The number of Chinese-made and owned supercomputers is second only to the United States in the world.

This supercomputer can be used to analyze proteins, develop new drugs, etc., and can be used to simulate nuclear explosions and decrypt codes in the military. It should be noted that the large-scale integrated circuits required for the manufacture of such computers are still very backward, and most of them still need to be imported.

In the past, long-distance communication relied on long-distance calls or telegrams. Because the number of calls is small, the price is very expensive. In 1966, K. C. Kao of the British Standard Communications Laboratory proposed to transmit laser signals with glass fibers without impurities and high transparency. Long-distance optical communication can be achieved if its loss can be as low as 20 dB/km.

In 1970, RD Maurer of Corning Glass Factory in New York used a "deposition process" to hydrolyze silicon tetrachloride vapor through flame to form a dense glass tube, which was then heated to form fine glass fiber through a mold. . The birth of low-loss glass fiber is a milestone in optical communication technology.

In 1970, RD Maurer of Corning Glass Factory in New York used a "deposition process" to hydrolyze silicon tetrachloride vapor through flame to form a dense glass tube. After heating, it was drawn into fine glass fiber through a mold. The birth of low-loss glass fiber is a milestone in optical communication technology.

In 1976, Bell Labs conducted the first optical communication field experiment in Atlanta, which achieved good results. The average power loss of the fiber is 6 dB/km, and the error-free transmission information exceeds 10.9 km, equivalent to 17 weeks through the fiber loop. In December 1976, Bell Labs announced that Lightwave Communications passed its first test and the possibility of lightwave communication has been proven. From then on, the advent of the era of optical communication was announced, and the prelude to the era of optoelectronics in the era of microelectronics was officially unveiled.

The future trend is the triple play. Nowadays, mobile Internet access is very common. In this regard, the US Apple Company is ahead of the game.

Light has different colors and wavelengths. Not all colors of light can travel through the fiber.

The loss of the fiber has the lowest value and the second lowest value at 1450-1550 nm and 1250-1350 nm, respectively, and thus is the two main windows of optical fiber communication. In order to allow an optical fiber to propagate as many information channels as possible, a wavelength division multiplexed optical communication system is adopted, which divides the two bands into narrow wavelengths, each of which forms a certain communication capacity. Signals of different wavelengths are transmitted to each other through an optical fiber, and then demultiplexed, and the optical detector transmits the electrical signals originally transmitted at different wavelengths. Since the optical signal is gradually attenuated during transmission, in order to achieve long-distance transmission, the signal is amplified by an erbium-doped fiber amplifier at regular intervals.

The basis of wireless communication is cellular mobile phones. Its early standard was the "Advanced Mobile Phone Service" system (AMPS) introduced by Bell Labs in 1978. The system divides the service area into a number of small hexagonal cells, just like a cell (see Figure 19). Each cell has a low power radiotelephone transmitter, receiver and a control system to form a base station.

The base stations of each service area are connected by fiber to a central switching entity (mobile office) which is equipped with an electronic switching system. The base station network tracks the location of the mobile terminal, and when the mobile terminal arrives at another cell, it can automatically re-establish contact with the neighboring base station to continue the call. Since the wireless call power in the cell is low, it only affects the limited range, and thus the communication signal with other cells does not cause interference.

The first AMPS system was successfully tested in Chicago in July 1979. In April 1992, AT&T Microelectronics Group announced the creation of integrated circuit chips for next-generation digital cellular phones, making the company a leading supplier of digital signal processing components for mobile communications. This kind of digital signal processor constitutes the DSP1600 series, which greatly reduces the size and power of the mobile phone and is very popular among users in the market.

Various wireless communications and their operating frequencies. The band is from the micron to the millimeter band and the frequency is 20-80 GHz.

The most critical device in wireless communication is the semiconductor high-frequency oscillator component. There are currently two types: high electron mobility transistor (HEMT) and heterojunction bipolar transistor (HBT). They are actually typical triodes, but due to molecular beam epitaxy, each layer of n-p-n can be made thin, reducing the path of electron motion and having a high cutoff frequency fT. At present, the cutoff frequencies of these two devices have reached more than 100 GHz, meeting the needs of wireless communication. 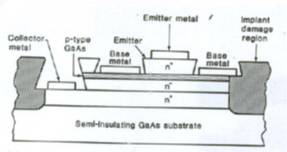 Since the invention and application of cast polysilicon in the 1980s, it has grown rapidly. It has continuously squeezed the market of monocrystalline silicon with relatively low cost and high efficiency, and has become the most competitive solar cell material. By the beginning of this century, it has accounted for more than 50% and has become the most important solar cell material.

Today, amorphous silicon thin film solar cells have developed into one of the practical and inexpensive solar cell varieties, and have considerable industrial scale. The world's amorphous silicon solar cells have a total component production capacity of more than 50MW per year, and sales of components and related products are more than $1 billion. The application range is small, such as watches, calculator power supplies, and independent power plants up to 10MW, which has played an important role in promoting the development of solar photovoltaics.

Compared with crystalline silicon, amorphous silicon film has the advantages of simple preparation process, low cost and continuous production in a large area. In the field of solar cells, the advantages are as follows:

(1) Materials and manufacturing processes are low in cost. This is because amorphous silicon thin film solar cells are prepared on inexpensive substrate materials such as glass, stainless steel, plastics, etc., and are inexpensive; and amorphous silicon films are only a few thousand angstroms thick, which is less than the thickness of crystalline silicon cells. One percent, which also greatly reduces the cost of silicon raw materials; further, amorphous silicon is prepared at low temperatures, and its deposition temperature is from 100 ° C to 300 ° C. Obviously, the energy consumption of scale production is small and can be greatly cut costs.

(2) It is easy to form large-scale production capacity.

(4) Easy to implement flexible batteries. Amorphous silicon can be fabricated on a flexible substrate, and its silicon mesh structure has special mechanical properties. Therefore, it can be made into a light, flexible solar cell, easy to integrate with buildings, and various daily necessities.

However, compared with crystalline silicon, the efficiency of amorphous silicon solar cells is relatively low, and the highest conversion efficiency in the laboratory battery is only about 16%; in practical production lines, the efficiency is not more than 10%; and, amorphous silicon The photoelectric conversion efficiency of solar cells has been seriously attenuated under the long-term illumination of sunlight, and so far there has not been a fundamental solution.

In addition, there are compound solar cell laminates for military and satellite applications.

Energy is an indispensable element of economic and social sustainable development. Saving energy and improving energy efficiency are major strategies for sustainable energy development. According to statistics, the world's "lighting" energy consumption accounts for about 20% of the total electric power. Due to the efficient illumination of LEDs, LED white light illumination can save a lot of power coal and crude oil usage, and can reduce 2.5 billion tons of CO2 emissions per year globally.

Therefore, GaN LED white light illumination has a huge market prospect. In the future, after the cost and efficiency problems are solved, it can replace the incandescent lamps and fluorescent lamps that are widely used at present, triggering a revolution in white light illumination technology. Internationally, the medium-term target of semiconductor lighting sources (within 5-10 years) is set at >100 lm/W, and in 2020, it is 200 lm/W or 300 lm/W, which can replace traditional lighting.

Optical disk storage and laser ranging, laser printing, laser instruments, etc. are another major application area for semiconductor lasers. The laser wavelengths used for CD discs (read-only discs) and DVDs (numeric discs) are 780 nm and 670 nm, 650 nm, respectively, and the laser "writes" information into or reads "audio" or optical signals from the disc. The shorter the wavelength of the laser, the higher the storage density of the disc. An InGaN laser with a wavelength of 410 nm can further increase the storage capacity of optical discs. InGaAlP lasers with a wavelength of 670-630nm have replaced He-Ne lasers in many applications, and have been used in laser ranging, laser printing, and laser medical instruments.

The AlGaAs high-power laser with a wavelength of 808 nm is a pump source for a high-power YAG (yttrium-doped yttrium aluminum garnet) solid-state laser. It replaces the original helium gas laser and eliminates the huge power and cooling system, making the solid-state laser highly efficient. Small size, high performance, long life, low cost, suitable for military applications, such as laser radar and nuclear explosion simulation, nuclear fusion research. The underwater light propagation window is 590nm, and the birth of the blue-green laser has given a green light to underwater communication. The most critical component of a fiber optic gyroscope in the direction of rockets and aircraft flight is a semiconductor superluminescent diode.

In nature, the sensitive absorption peaks of water vapor, methane, ammonia, carbon dioxide, carbon monoxide, hydrochloric acid, bromic acid, hydrogen sulfide and the like are in the range of 1.5-2.0 mm. InAsSb or GaInAsSb strained quantum well lasers have wavelengths ranging from 1.0 to 4.0 mm, and quantum cascade lasers that have appeared in recent years have wavelengths of 4.0-17 mm. These types of lasers cover the infrared-far infrared range, forming an environmental guardian for atmospheric monitoring and monitoring.
Previous："Science | Semiconductor Development History"
Next："Science | Future Development Of Semiconductor Technology"